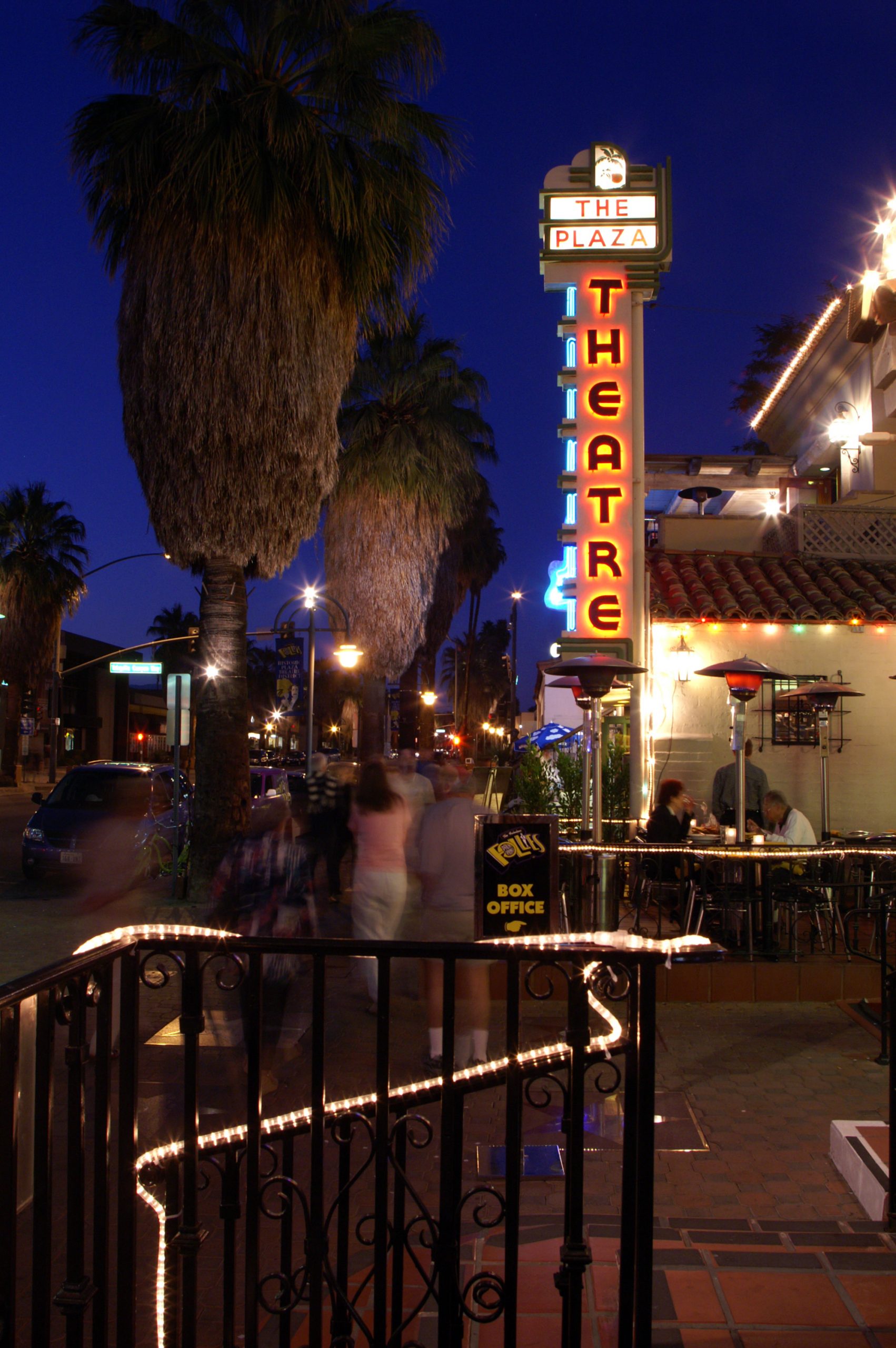 On that date, the new theater was the site of the world premiere of the MGM romantic comedy, Camille, starring Robert Taylor, Gretta Garbo, and Lionel Barrymore. According to the Desert Sun, Hollywood celebrities including Frank Capra, Ralph Bellamy, Tyrone Power, Charles Farrell, Barbara Stanwyck, and Shirley Temple were in attendance at the air conditioned 850-seat theater.

Because of the small population of Palm Springs at the time and the difficulty obtaining an adequate supply of first-run movies, live performances including community events, kids shows, high school revues, etc. quickly replaced films.

In the 1940s entertainers such as Bob Hope and Jack Benny broadcast their national radio shows from the Plaza Theatre. The theatre also was home to live performances by Frank Sinatra, Bing Crosby, Donald O’Connor, Gordon MacRae, and others. In 1990 the Plaza Theatre was also the venue for the first Palm Springs International Film Festival that was founded by then Mayor Sonny Bono in order to boost post-holiday business and to help generate awareness of Palm Springs as a year-round tourist destination.

In 1991 Hollywood producer Riff Markowitz leased the then run-down Plaza Theatre and launched a song and dance vaudeville-style review known as “The Fabulous Palm Springs Follies.  Featuring music of the 1930s, 1940s, and 1950s, the energetic cast of costumed singers, dancers, showgirls, and comedy acts were all between the ages of 60-85.  All shows ran for 2 ½ hours and ended with a patriotic finale.

The 7-month season of “The Fabulous Palm Springs Follies”, from the end of October to mid-May, featured 10 shows a week and over 180,000 local residents and tourists a year attended the high energy extravaganza that featured new shows and headliners each year. The show was a fixture in Palm Springs and gained a world-wide reputation for its glamour.  Markowitz presided over 4,500 performances over 23 years until the final performance on May 18, 2014.

To date several fundraising events for the theatre featuring celebrities from the entertainment world have taken place and plans are underway for starting the extensive renovation of the Class 1 Historic Site.  On February 16, 2022 a special fundraiser featuring Nancy Sinatra was held at the theatre, Lily Tomlin created a promotional YouTube video, in October 2021, David Lee, television producer of such shows as Frasier and Cheers, donated $5 million to the restoration project, and on March 19, 2022 Lee along with several stars of Frasier re-united for another fundraiser. Significant donations have come in from other individuals and organizations including an anonymous $2 million donation in early 2022.

On September 28, 2022 a launch party for Desert Magazine was held at the theatre where photographer, Michael Childers, and former Palm Springs city councilmember and current president of the Palm Springs Plaza Theatre Foundation, JR Roberts, were honored. On November 11, 2022 a major fundraising concert, “Rock the Plaza” with a stellar line-up of musicians including Alice Cooper, will take place.